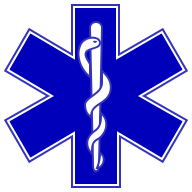 The Star of Life is a blue, six-pointed star, outlined with a white border which features the Rod of Asclepius in the center, originally designed and governed by the U.S. National Highway Traffic Safety Administration (NHTSA) (under the United States Department of Transportation, DOT). Traditionally in the United States the logo was used as a stamp of authentication or certification for ambulances, paramedics or other EMS personnel. Internationally, it represents emergency medical services (EMS) units and personnel. A similar orange star is used for search and rescue personnel and yet another version is used for wilderness emergency medical technician.

Originally, many ambulances used an Omaha orange cross on a square background of reflectorized white to designate them as emergency units. This logo was used before national standards for Emergency Medical Personnel or ambulances were established. Designed by Leo R. Schwartz, Chief of the EMS Branch, National Highway Traffic Safety Administration (NHTSA),[1] the Star of Life was created after the American National Red Cross complained in 1973 that the orange cross too closely resembled their logo, the red cross on a white background, its use restricted by the Geneva Conventions.[2] The newly designed cross was adapted from the Medical Identification Symbol of the American Medical Association, which was patented by the American Medical Association (AMA) in 1967. The newly designed logo was trademarked on February 1, 1977 with the Commissioner of Patents and Trade-marks in the name of the National Highway Traffic Safety and Administration (registration number 1058022). The logo was “given” to the National Registry of Emergency Medical Technicians (NREMT) for use as the emergency medical technicians (EMT) logo after the trademark expired in 1997

The snake emblem is the Rod of Asclepius, widely used as the symbol of medical care worldwide. There are several theories as to its development, and it is named for the Greek mythology figure Asclepius, who was said to have possessed healing power, although it has been claimed to have origins from other sources, including a biblical story from Numbers and as a representation of the drawing out of a guinea worm.
Symbolism

The six branches of the star are symbols of the six main tasks executed by rescuers all through the emergency chain:

1.Detection: The first rescuers on the scene, usually untrained civilians or those involved in the incident, observe the scene, understand the problem, identify the dangers to themselves and the others, and take appropriate measures to ensure their safety on the scene (environmental, electricity, chemicals, radiation, etc.).
2.Reporting: The call for professional help is made and dispatch is connected with the victims, providing emergency medical dispatch.
3.Response: The first rescuers provide first aid and immediate care to the extent of their capabilities.
4.On scene care: The EMS personnel arrive and provide immediate care to the extent of their capabilities on-scene.
5.Care in Transit: The EMS personnel proceed to transfer the patient to a hospital via an ambulance or helicopter for specialized care. They provide medical care during the transportation.