Press Release-Office of the Mayor

Mayor Eddie Girdler and other city officials discussed economic   and community growth strategies with Federal Co-Chairman Earl Gohl and top officials throughout the Eastern United States at the Appalachian Regional Commission conference in Pittsburg. The effort to transform the Appalachian Region focused on Embracing Change to Drive Progress. Detail discussions took place involving business expansion and retention, ways to develop business clusters, tourism marketing, and expansion of the health care system including training for health professionals. One new initiatives to utilize local natural resources such as natural gas to help support the coal mining industry and create 100,000 jobs in the Appalachian region of the United States.

In addition to the major efforts to provide new and innovative measures to save jobs in the coalmining areas, extensive discussion involved the use of natural gas in the manufacturing industry and helping reduce the cost of utilities for small business.   The expansion of Appalachia’s energy potential would create 100,000 new jobs according to the U.S. Department of Energy, private sector energy companies, and experts at the Pennsylvania Economic Development.

Somerset staff participated in discussions on economic development including manufacturing jobs that need natural gas to be competitive.   Other discussions included small business development involving local and regional tourism efforts and how to encourage tourists to spend more dollars in the community, and how the global market is a significant factor in job and business locations. Expanding educational opportunities in critical job sectors was also an area that the city participated in providing ideas. Kentucky is progressing on broadband efforts and the SOAR initiative sponsored by Congressman Hal Rogers.

A proposed $4 million project has already been developed by banking and other private industries that will benefit Somerset. This was a connection made by the Mayor and staff to take advantage of the new coordination and cooperation in tying economic growth to benefit the Appalachian region. Mayor Girdler said that the initiative must involve both the public and private sectors in a partnership so that more jobs are created and the private sector has the confidence to invest in this region. 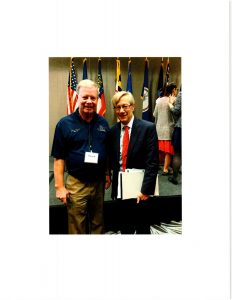