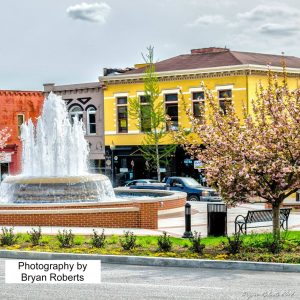 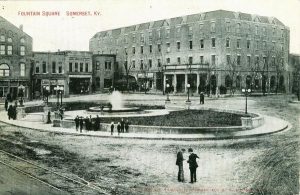 What is now Somerset, Kentucky was first settled in 1798 by Thomas Hansford and several Jaspers. It was so named because those settlers were from Somerset County, New Jersey. The City of Somerset was incorporated February 17, 1887. Somerset was established as the county seat town in 1802. City trustees were elected in 1802 and $1,000. raised by popular subscription was used to buy a 40 acre tract from William Dodson. The tract includes the present Fountain Square. Main Street divided the tract in half, and the court house stands on part of the original plot.

Flat Lick Baptist Church was established in 1799. The first passenger train arrived here in 1877. The first fire department was adopted by ordinance on January 28, 1908 for a horse and wagon fire department with volunteer firemen. It was said that the horse and buggy moved too slowly, and  the hose cart, pulled by the volunteers , was used more often. The town pump was located on the square.

Jesse James and his gang was said to have came to Somerset from Mt. Vernon with the intention of robbing the First National Bank but were frightened away when they saw a number of young men, armed with shot guns, standing around the square. The youths had gathered on the square to go bird hunting and knew nothing about the plans of Jesse James. The gang went on to Columbia and held up a bank there.

Somerset is situated on the northeastern edge of Lake Cumberland. Somerset is 76 miles south of Lexington, Kentucky; 129 northwest of Knoxville, Tennessee; and 128 miles southeast of Louisville, Kentucky. Somerset has a population of 11,196. City of Somerset covers a land area of 8 square miles.