Written, photo and video essays to be released in coming weeks

John Perkins has never been one to dwell on the past.

In fact, he only looks there in gratitude to the people who have supported him.

As a young man, Perkins often visited the old Virginia Theatre, a venue where black patrons were required to sit in the balcony and there was no indoor restroom for their use. When asked about the significance of a mural of his likeness painted last weekend on the theater’s back wall, he says he stands on the shoulders of others who made his life easier, and simply looks forward. To the post office across the street. The place where he built his future as a postmaster and owner of a successful barbecue enterprise. 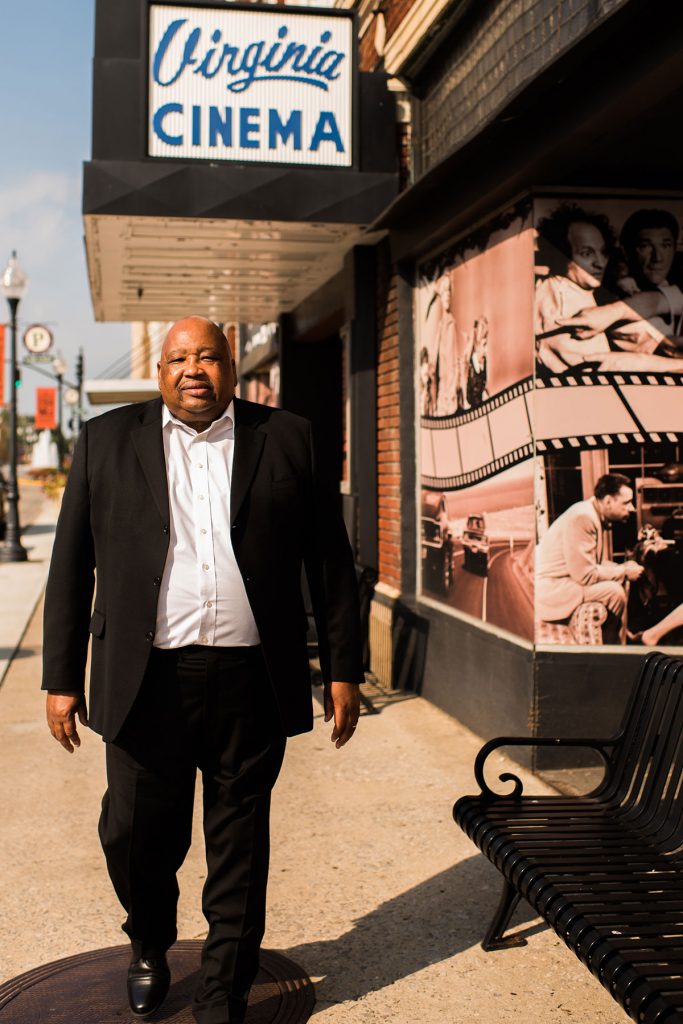 Photo by Lacy Hilliard: This photo of John Perkins taken for the #seemyset story series inspired the mural.

“When I was looking at the mural, it had a great significance for me,” Perkins said. “I think I told my wife that all the carriers loading their vehicles will come out the door and I’m facing them. It means a lot.”

The new mural is part of a growing initiative by the City of Somerset to share stories of influential people in the community. The #seemyset story series will include written, photo and video essays on the city’s new tourism website, seesomerset.com. Some of these may also include a material artistic component.

The idea for the series was born at the end of 2019, soon after the city unveiled its new brand and began working on the website. With the desire to honor diversity across gender and race, Tourism Director Leslie Ikerd began identifying residents for the series.

Perkins, lovingly known to the community as Johnny B., was first on the list.

“Johnny B. is the epitome of the Somerset person we want to highlight,” Ikerd said. “He’s always positive, he always has a smile on his face, always welcoming. He is what I call a tourism ambassador. His story shows what Somerset is to our guests. He always continued to move forward — never bitter, always better. Those are the people we want to lift up and tell their story.”

The city partnered with Wandering Elm Photography’s Lacy Hilliard to take portraits of Perkins and begin the storytelling process. The new tourism website launched in February. But soon after, when the world came to a halt because of a global pandemic, so did the project, Ikerd said.

“Because of COVID-19, we needed to pause and turn our attention to the virus, to the impact it was having on the community and the local economy,” Ikerd said. “So we refocused our efforts on our #seemyset LIVE! Facebook series and our local businesses and artists who were struggling. It’s the same concept, but we just needed to be telling a different story at that moment.”

Turns out, pausing the project for a global pandemic was quite serendipitous. It was during that time Somerset artist Jeremy Scrimager began to notice a Louisville portrait artist burning up the art scene with murals on garage doors. Scrimager and Damon Thompson had mutual friends through the Somerset-Louisville arts exchange sister city program — an initiative of Somerset Mayor Alan Keck and Louisville Mayor Greg Fischer — and so, Scrimager decided to contact him.

“Someone recommended I reach out to him about bringing him down,” Scrimager said. “We struck up a conversation about the possibility and slowly whittled down a date.”

To say Thompson was on fire with garage door murals is an understatement. Six years prior, the Louisville resident and native switched from oil and canvas portraits to painting with spray cans, practicing on a wall he built in his backyard. But he never felt he had enough time to truly perfect his craft. After being laid off from his job in late March because of the pandemic, Thompson decided to see if anyone would let him experiment on their garage. Between March 21 and May 8, he painted 43 murals in different locations across Possibility City.

Thompson had returned to work, still completing one to two murals a week, when he heard from Scrimager about bringing his work to Somerset.

Doing so supported Thompson’s belief that a community’s artists only get stronger if they engage with and learn from artists in other communities — a concept Keck, Scrimager and Ikerd also believe in.

“Part of our culture is bringing in different types of people, showing a different perspective as part of a visitor-based tourism approach,” Ikerd said. “We are still all Kentucky people; we have that common thread amongst us. But this allows us to help build ambassadors for Somerset in other communities and support local artists by giving them opportunities for growth.”

Thompson was game. “I told them, ‘If you can give me a good picture and a wall, yeah, I can make it happen,’” he said.

The city had already taken that good picture, ironically in front of the Virginia Theatre. And the country had since entered another chapter of crisis, one in which its black community demanded justice and freedom from police brutality and discrimination. Where this conversation was happening in Somerset, one could find Johnny B. — offering advice to local leaders in the wake of this unrest and lifting up his community in the name of love and unity.

When Scrimager approached Keck about the mural potential and asked who should be featured, the mayor immediately knew: It would be of his friend John Perkins — successful entrepreneur, community leader and bridge-builder.

“There are times in life where you tear things down, trusting they’ll be rebuilt better than ever,” Keck said. “The symbolism between our work to rebuild the Virginia into a place that’s more inclusive for all and Johnny B.’s enduring love for all people and our community was too strong to ignore. I cherish our friendship and look to him often for guidance and wisdom.”

And the wall? Two other locations fell through before the opportunity at the Virginia presented itself the day before Thompson was scheduled to arrive. Ikerd asked permission to paint on the back of this iconic Somerset building that is so symbolic of Perkins’s story, and the building’s owner, the Downtown Somerset Development Corporation board, voted to approve her request.

The project had come full circle.

Still, given all that has happened in his past, John Perkins looks ahead.

“It’s been an honor to be a part of what’s going on downtown,” Perkins said. “The mayor and the city council and everything that’s happening in this community, I think we’re on the right road.

“With what’s going on in the world, with all the division, I think we’re unique here,” he continued. “I think in my 72 years, we’ve come to the top of the hill. I see more promise as far as racial equality than I’ve seen in my life. We’re so close that we shouldn’t let this moment get by.”

Watch seesomerset.com and Somerset Tourism’s Facebook page, @SeeSomersetKy, for the release of the first part of the #seemyset story series on John Perkins.