The City of Somerset’s police chief has received the state’s highest professional honor in law enforcement – the 2020 Chief of the Year Award.

The award was presented to Chief William Hunt at Monday’s city council meeting by Kentucky Association of Chiefs of Police (KACP) Executive Director Shawn Butler, who drove three hours to surprise Hunt with the honor.

“As you all know, it’s been a tough year for all of us,” Butler said as he addressed the council, referring to the COVID-19 pandemic that canceled the organization’s annual conference. “Normally what I’m going to do here tonight we would have done at our conference about a month ago. But we made it a point that we wanted to come down here and surprise the chief.”

Nominated by Somerset Mayor Alan Keck, Hunt’s lengthy list of accomplishments in just three short years, his dedication to supporting his officers, his involvement in the community and his advocacy for his profession drove his selection for the award, Butler said. 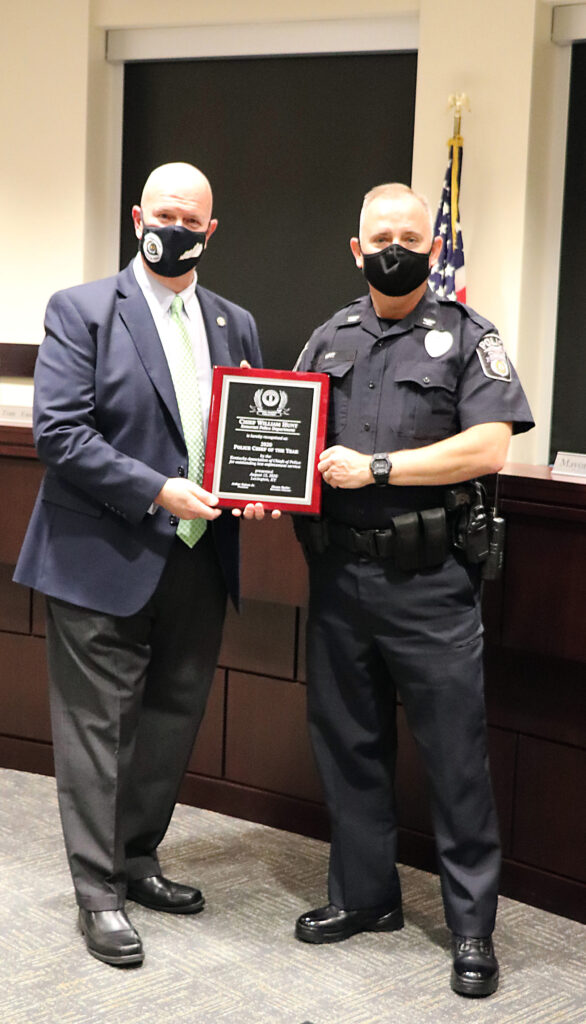 “You guys are lucky,” Butler told the council. “I know he hasn’t been a chief for a long time, but I was a chief for 15 years and I don’t think … I was involved in that much. So for the short time he’s been in your community, I’d say you’re very blessed.”

In his nomination letter, Keck commended Hunt for his leadership in the community, in adding new positions and advocating for departmental pay increases and equipment and vehicle upgrades.

“Chief Hunt is truly a servant leader who has propelled the Somerset Police Department to one of the best in the state,” Keck wrote. “Chief Hunt’s implementation of community-oriented policing has been an amazing model for our community. He is incredibly active with our community events and present in arenas that many would want to avoid. His leadership is disarming and uniting, and I couldn’t be more proud.”

In addition to his 24 years serving the department, Hunt has led the city’s police force since January 2017, at which time it was understaffed with only 31 officers. Since then, the department has reached a full staff level and Hunt has added another seven positions, including two school resource officers, two narcotics officers, two detectives and two patrol officers. He has negotiated three departmental pay increases, started a new K-9 patrol program and a narcotics unit. Hunt also purchased the region’s first 3-D Scanner Total Station, which is beneficial for crime scenes and accidents. “It’s a high-tech piece of equipment and they’re very hard to come by, so that in itself is a great accomplishment for your region,” Butler said.

In addition to replacing a majority of the department’s vehicle fleet and securing funds to implement a new digital radio system for all cars and officers, Hunt has implemented several community programs, including the Shepherds Watch Crime Prevention Program, which embraces video surveillance technology and community participation to deter crime and accelerate solving it when it happens; and the Shop with a Cop program, which helps purchase Christmas gifts for children in need and builds relationships between police and community members.

Hunt is an honor graduate of the United States Air Force Police Academy. He holds a Police Instructor’s Certificate and a Law Enforcement Executive Certificate from the Kentucky Law Enforcement Council and is a member of the Law Enforcement Coordinating Committee Executive Board for Robert Duncan, U.S. Attorney for the Eastern District of Kentucky. He is chair of the Lake Cumberland Area Drug Task Force and serves as the second vice president of KACP.

Hunt thanked his wife, Carla, and family for supporting his career endeavors, and the mayor and council for allowing him to help the department thrive in such a short amount of time.

“Our work here is only getting started,” he said.