City of Somerset receives Governor’s Award in the Arts

SOMERSET, KENTUCKY (November 13, 2020) — The City of Somerset will receive the state’s most prestigious arts award, the Governor’s Award in the Arts, for its support of the arts through government action.

Presented annually, the Governor’s Awards in the Arts recognize individuals and organizations for their dedication to sharing Kentucky’s rich arts history with the citizens of the Commonwealth. Nominations are accepted in nine categories representing all areas of the arts, including business, community arts, education, government and media, among others. The City of Somerset will receive the Government Award.

In a letter to the Kentucky Arts Council last year nominating the city and Mayor Alan Keck for the honor, Somerset Tourism Director Leslie Ikerd pointed to Keck’s vision to revitalize downtown, increase tourism and enhance the culture of the city with the arts as the focus.

“In a very short eleven months, he has not only fulfilled all of his campaign pillars, but he has created community,” Ikerd wrote. “ … The arts are the heart and soul of who we are as a people, and we are blessed with Mayor Keck and his vision. He and his staff have lifted up Somerset in a way that some only could hope to imagine.”

That effort began when Keck took office in January 2019 with the creation of a new brand for the city. Keck invited several of the community’s artists to the table to help tell Somerset’s story — creating a logo and brand story that reflects the influence the community draws from across Kentucky, the diversity of its people, and the uniqueness of its culture and heritage. 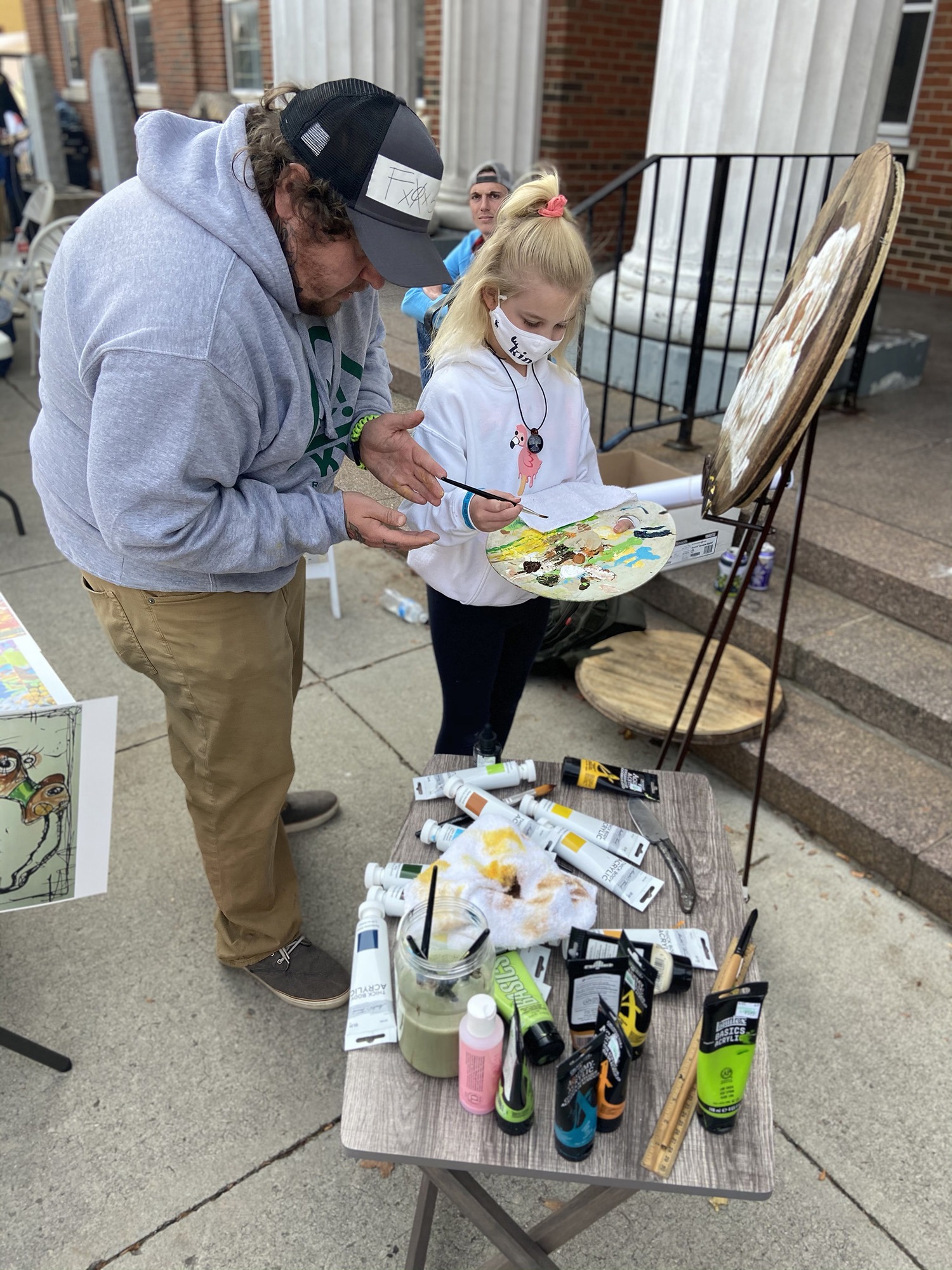 Local artist Jeremy Scrimager, who wrote a letter supporting the City of Somerset’s nomination for the Governor’s Awards in the Arts, conducts an impromptu art lesson while painting live at the city’s Moonlight Festival in October.

“Somerset, Kentucky is a melting pot of hues and the center point on the compass,” reads the brand messaging, crafted by local artist and writer Jeremy Scrimager. “We not only absorb influence from all four corners of Kentucky, but we brighten the bluegrass with an influence of our own. A unique spice. A one-of-a-kind color.”

Every initiative the city undertakes is now viewed from the lens of how it embraces that influence to build community and enhance culture, Ikerd said, with the arts as an essential component. In addition to creating four new festivals downtown that all feature local food, music and art and have generated new and increased revenue for the city, murals telling stories of Somerset’s heritage and culture now dot the city’s downtown landscape. Retail shops and restaurants displaying and celebrating local art and entertainment have opened downtown. The city’s new indoor-outdoor market, the Lake Cumberland Farmers Market, offers a space for farmers, artists and craftspeople to promote and sell their products. And the city’s new health initiative, Healthy Somerset, embraces the arts as a way to promote a healthy lifestyle physically, mentally and spiritually.

Keck also introduced a sister-city arts exchange program, which endeavors to build ambassadors for Somerset in other communities and support local artists by giving them opportunities for growth. Louisville was the first sister-city in the fall of 2019.

“It is no exaggeration to say that Mayor Alan Keck and his staff have wholly and unabashedly embraced and propped up local artists, writers, culinary experts, craftspeople, musicians and actors in an effort to showcase and strengthen Somerset’s artistic footprint in both the region and across the Bluegrass,” Scrimager wrote in a letter of support for the award. “Mayor Keck and his staff work tirelessly to engage with local artists and artisans and to gather their input and recruit their involvement in a number of local projects, festivals, and campaigns.”

Keck said his ultimate goal has been to have a significant generational impact within the community, which is his hometown. If Somerset’s people can take pride in who they are and get excited about what is happening in their community, Keck said, they are the best ambassadors for attracting and retaining people and commerce. The arts are crucial in that effort, he said.

“We’ve got to get back to the deep-rooted generational pride we have as Kentuckians that starts in individual communities,” Keck said. “If we come together to tell our story, to truly celebrate it, others will see what’s happening here and want to be a part of it. The arts are uniquely entwined with every part of Somerset’s story. We will continue to open doors for our artisans to shine brightly and light up our community. I am grateful to Governor Beshear and the Kentucky Arts Council for recognizing our successful efforts to do so.”

City representatives will accept the award during a virtual awards ceremony to honor the recipients. Details about the ceremony will be forthcoming. For more information about the awards, visit the Kentucky Arts Council’s website at artscouncil.ky.gov. 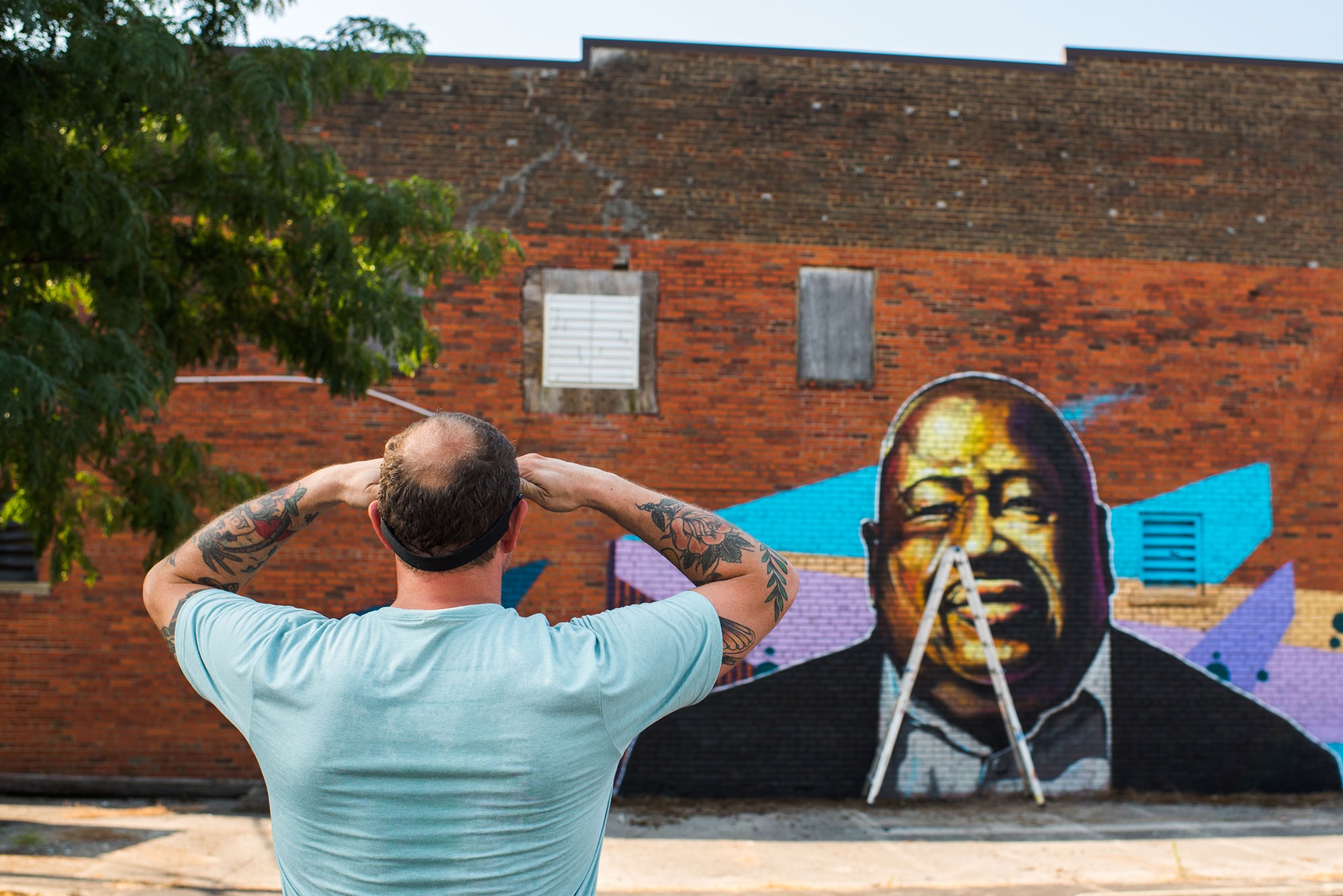 Photo by Lacy Hilliard: Louisville artist Damon Thompson looks at his work, a mural of Somerset resident John Perkins, from a distance. The mural is located on the back wall of the old Virginia Theatre.